Five out of six Q10 preparations failed the test 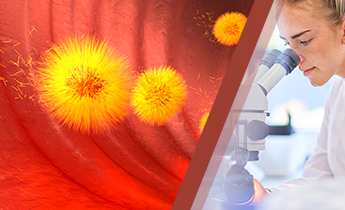 It is a waste of money to take a Q10 preparation if your body cannot absorb it, and this may very well be the case for a surprisingly large number of preparations on the market. Most people are unaware that the quality of the raw material alone is not what determines the bioavailability of a Q10 preparation. What is even more important is how the preparation is manufactured.

Millions of people across the globe take a daily Q10 supplement. This compound is rather unique for a number of reasons. A rather large number of scientific studies show that high-quality Q10 can help many people by improving their quality of life.

Does it matter which type of preparation I take, as long as it contains Q10?

Yes, there is a big difference between using one form of Q10 or the other. If you simply put Q10 in an oil-based formula into a gelatin capsule, there is no guarantee that the body can absorb the active ingredient (see graph below). You must handle the raw material in a special way that enables the digestive system to absorb it. 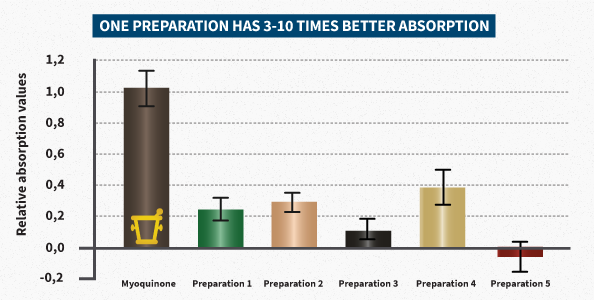 The chart shown above is from a study, which was published in the science journal, Nutrition. The figure reveals that there are huge differences between Q10 preparations and their absorption in the human body. In this study, some preparations were hardly absorbed.

It is difficult for the body to absorb Q10

It is not surprising that most Q10 formulations have poor bioavailability. In all Q10 raw materials, regardless of their quality, the Q10 molecules form insoluble and indigestible crystals that are unable to pass through the intestinal wall and reach the bloodstream. Pharma Nord has developed and taken out a patent on a special manufacturing technique that enables these Q10-crystals to dissolve at normal body temperature. For this to happen, you need to mix the Q10 crystals with oils that have different melting points and then heat the mixtures in a specific way. This procedure organises the individual Q10 molecules, so they are able to pass through the intestinal wall and enter the bloodstream.

Is the original Q10 preparation only available with a prescription?

The patented process made the difference

In 1991, Pharma Nord started using a special manufacturing method that has since been refined and patented. This highly specialized Q10 formulation has been used in some of the most significant scientific studies of Q10 ever to be conducted, and it is because of the documented bioavailability that Pharma Nord’s Q10 formula has become the official science reference of the International Coenzyme Q10 Association (ICQA).

Buying cheap can be expensive

Buying a CoQ10 preparation that the body does not absorb may be quite cheap compared to other products. However, it is still money out of the window. CoQ10 just passing through the digestive system will of course not have any effect. Conversely, it makes sense to choose a preparation which carries documentation for its absorption. Even if the price is slightly higher, it may still turn out to be the lowest cost.

Should I take a daily Q10 supplement?

There are many reasons why you should take a daily Q10 supplement, as long as you choose a preparation with documented bioavailability. The original Q10 brand, which has become the benchmark for scientific research, is now available in Ireland and sold under the brand name BioActive Q10 Gold.

Pharma Nord’s Q10 is considered to be the best documented Q10 formulation in terms of bioavailability and safety, which is why this product was selected for two of the largest and most ground-breaking studies of coenzyme Q10 ever, the Q-Symbio study (Journal of the American College of Cardiology, Heart Failure, 2014) and the KiSel-10 study (International Journal of Cardiology, 2013)