Vitamin D plays a role for absorption of calcium

Directions:
1 capsule daily, or as recommended by a physician. To be taken with food and a glass of water.
Do not exceed recommended amount.

Pregnant and lactating women and those on medication should seek professional advice prior to taking supplements.

Nutritional supplements should not be used  as a substitute for a varied diet and a healthy lifestyle.

Storage:
Room temperature and keep out of direct sunlight. Keep out of the reach of children.

What are BioActive D-Pearls 38 µg?

D-Pearls are small, soft gelatin capsules with 38 μg (1520 International Units) of vitamin D3 in each capsule. The vitamin D is dissolved in high quality cold-pressed olive oil to improve absorption in the digestive system as vitamin-D is a fat-soluble vitamin. The capsule size makes them easy to swallow, but they can also be chewed. Research has shown that D-Pearls have a high absorption in the body.

You can be absolutely sure that each capsule contains the amount of vitamin D indicated on the preparation, as each and every batch, ie. each new production of D-Pearls is control analyzed.

D-Pearls has been on the European market since 2007. 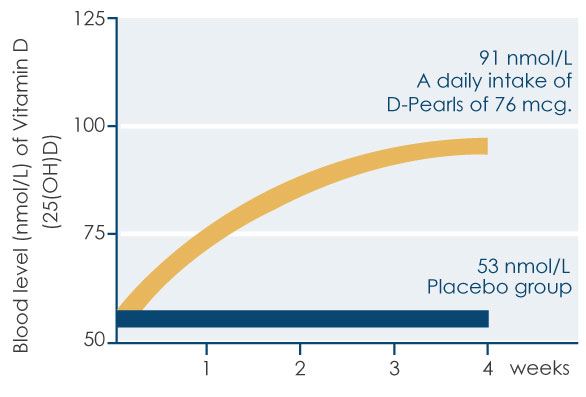 What is vitamin D?

Vitamin D is a fat-soluble vitamin. This implies that the vitamin need some fat in order to be absorbed in the intestine. Like other vitamins, vitamin D is essential. There are several kinds of vitamin-D, but the two most important forms are D2 (ergocalciferol) and D3 (cholecalciferol).

Vitamin D2 Is only available from the diet. It is produced by certain fungi and plants when they are exposed to ultraviolet light.

Science used to believe that both forms of vitamin D were equally effective in the body. However, depending on the measuring method used, vitamin D3 is 56-87 per cent more effective than vitamin D2 when it comes to raising blood levels of vitamin D. Moreover, D3 is stored in fat tissue more than three times as effectively as D2. *

Vitamin D has an array of important functions in the body. For instance, vitamin D is:

There are two primary sources of vitamin D: Sunlight and Diet.

Vitamin D from the Sun

We form a precursor to vitamin D3 in the skin based on cholesterol when we get enough sunlight or equivalent UV radiation. This precursor must subsequently be converted (hydroxylated) in the liver and kidneys, respectively, to become active vitamin D.

Vitamin D from sunlight is an effective vitamin D source but is only produced when the sun is high in the sky. In large parts of Europe, this only happens during the summer period, and therefore we can only produce sufficient levels of the vitamin this time of year.

Vitamin D from the diet

Vitamin D is found only in larger amounts in oily fish, such as salmon, herring and mackerel. Additionally occurring vitamin D are found in limited quantities in meat, dairy products and eggs. In the plant kingdom vitamin D is available only in small amounts in certain fungi. In our diet some of the best sources of vitamin D are:

There is some loss of vitamin D from the diet when heated.

Although the aging process affects us differently depending on our genome and lifestyle, everyone will find that, over time, the body becomes worn out and functions less efficiently. This phenomenon is part of the normal aging process and can also have an effect on the amount of vitamin D we need.

Most of the body's cells are equipped with vitamin D receptors, which are small structures on the cells’ surface that are activated by active vitamin D3. These receptors on the different cells is also the explanation for the many different effects of vitamin D in the body.

It became clear that vitamin D contributes to the normal functioning of the immune system when it was discovered that various white blood cells such as macrophages and dendritic cells as well as T and B lymphocytes are equipped with vitamin D receptors. Vitamin D is necessary for these immune cells to perform their functions. For example, it has been shown that active vitamin D activates genes in the cell nucleus; these genes encode peptides that inhibit viruses, bacteria and fungi.

Our immune system reaches peak efficiency in the teenage years. Even in healthy elderly people, the immune system has become more vulnerable to new infections that it has not encountered before. The elderly, for example, have fewer white blood cells in the blood, and the degree of inflammation in the body is higher than in younger people. Older people should pay special attention to getting enough vitamin D.

From the age of 40, there is a gradual loss of bone mass on the order of 0.5% annually for men and about twice as much for women.

Our muscles also need vitamin D to function normally. The ability of muscles to contract is dependent on calcium ions. As previously mentioned, vitamin D regulates the blood's content of calcium and in this way also regulates muscle function.

As we get older, the number of vitamin D receptors in muscle tissue decreases. This results in a gradual loss of muscle mass and muscle strength. The heart muscle, on the other hand, is not significantly affected by this.

It is known that the body produces a precursor to vitamin D in the skin when exposed to sunlight of a certain intensity, i.e. a wavelength between 290 - 315 nm. Factors that prevent or reduce the production of vitamin D from sunlight are severe air pollution, clothing, dark skin, use of sunscreen, obesity, the sun’s being too low in the sky, and old age.

Vegans and vegetarians are advised to adhere to the official guidelines for sun exposure and possibly take a supplement of vitamin D during the winter period.

Blood levels of vitamin D can be determined by a blood test that measures the unit 25-hydroxyvitamin D (25-(OH)D) and is expressed in nmol/l. Vitamin D status is graduated in the following way:

For normal, healthy individuals there is no immediate need to measure blood levels of vitamin D. However, it is advisable for certain groups to gauge their vitamin D status.

For instance, people with a lifestyle that gives reason to believe that they could benefit from checking their status. Besides the obvious factors that limit vitamin D such as lack of sunlight and poor diet, there are more subtle causes such as the fact that some types of medicine may affect the body’s vitamin D absorption, thereby increasing the need for this particular nutrient.

The EU Food Safety Agency (EFSA) has evaluated the evidence behind the product's content of vitamin D and has acknowledged the following statements:

Pharma Nord's D-Pearls was chosen for large study because of extensive documentation on the product.